skip to main | skip to sidebar

Debuting Monday, January 5, 2009, the weekly “Ask the Author” series seeks will offer readers and visitors to the On the Job blog greater insight into author Daniel P. Smith’s writing and research for On the Job: Behind the Stars of the Chicago Police Department as well as the book’s content. Each Monday, Smith will answer a question from a reader or post a question he has received from an audience member at one of his numerous book presentations.

“I see this as a great opportunity to further interact with my readers and provide others added understanding of the Chicago Police Department world,” Smith said. “I’ve been fortunate that my audience members have been so interested in the subject and so eager to ask questions. In addition to posting audience member questions, I wanted to give readers a platform to have their questions answered as well.”

Are you a reader with a question for On the Job author Daniel P. Smith? Send it to smithwriting@gmail.com.
at Monday, December 22, 2008 No comments:

RebeccasReads.com review gives high praise to On the Job

A look behind the uniform
December 17, 2008
By RebeccasReads.com (Austin, Texas)
Reviewed by Kam Aures for RebeccasReads (12/08)

The author of "On the Job: Behind the Stars of the Chicago Police Department," Daniel P. Smith, grew up in a Chicago Police family. With two of his great uncles, two of his uncles, his father, and his brother all being members of the Chicago Police Department, Smith definitely has an inside look into the department and its officers. Smith himself chose a different career path as he says that he lacks "the assertive nature necessary to become a cop in one of the world's most dangerous cities and the mental makeup to challenge a city notorious for its criminal action." (p.1) Despite his decision not to join the "family business," he still finds the department to be very intriguing and chose to write "On the Job" to share with us "the interworkings of one of history's most storied professions in one of the world's most storied cities and to do so in the most truthful of lights." (p. 4)

I found the stories in the book to be very engaging and enjoyed getting a glimpse into the lives of the officers in the department. One of the most interesting things in the book to me was in the beginning where Smith prints a chart of all of the calls received on one particular Saturday night shift in Chicago's West Side 11th District. The sheer number and nature of the calls is staggering. Every couple of minutes there was something different. Right at the beginning of the shift there was a narcotics call, two minutes later there was a criminal damage to property, after two more minutes a domestic disturbance. This fast pace continued on for the entire shift with not a moment's rest.

"On The Job" is a well-written and informative account of real-life police work in one of the nation's largest cities. The photographs peppered throughout the book really add to the book's authenticity. The personal stories of the various officers are definitely ones that should be read. Anyone interested in police work or in the city of Chicago will enjoy the inside look that Smith's "On the Job" delivers.

Gapers Block, the popular blog about all things Chicago, has released a list of 2008's top Chicago-related books and Daniel P. Smith's debut work, On the Job: Behind the Stars of the Chicago Police Department, made the list alongside projects on President-elect Barack Obama, Chicago's murderous history, and the city's social scene.

"Gapers Block is recognized as one of Chicago's premier sources for local information and I'm thrilled to be included in their annual list of top books," Smith said.

On the Job proves a fine holiday gift

With the holiday season upon us, word is On the Job: Behind the Stars of the Chicago Police Department makes a great gift for that Chicago historian, crime enthusiast, nonfiction reader, or just about anybody who seeks a darn fine story.

Through Christmas, copies of On the Job will be available for $18 (including basic shipping and handling in the U.S.) and can be signed with a personal note from author Daniel P. Smith. Interested? Contact the author directly at smithwriting@gmail.com.

Have a fine holiday season and thanks for visiting the On the Job blog.
at Thursday, December 11, 2008 No comments:

CHICAGO - One way or the other, it'll happen: Videotaped footage of a former police officer beating a female bartender again will flash across television screens throughout the nation.

That would be embarrassing for any police department, but for Chicago -- which already withstood the humiliation once -- it means much more. Especially now.

As bright as the media spotlight has shone on the department in the past, it will only get brighter because Chicago is the hometown of the next president of the United States and the city is vying for the 2016 Olympics. It's unclear whether Anthony Abbate, the officer charged in the beating, will stand trial -- it was supposed to begin Tuesday but has been delayed -- or if the case will end with a plea bargain. A judge's gag order has prevented anyone from talking publicly about the case.

More than a year after he last wore a badge and months after his boss said he wanted him fired, Abbate remains the best-known officer in the police department.

"I have to think it is important to get past (the case) not only from a PR standpoint, but Abbate has for the last two years defined what the department is," said Daniel P. Smith, author of "On the Job: Behind the Stars of the Chicago Police Department." "So many officers do their job the right way but Abbate has defined who they are (and) I know for a fact many of them want it all erased."

Chicago officials already have set about to change the police department's image, starting 11 months ago, when they hired a new police superintendent, Jodi Weis, the former head of the FBI's Philadelphia office. Police officers know that what they do is being watched like never before -- starting on election night, when a quarter million people descended on Grant Park to be part of President-elect Barack Obama's historic victory.

"I talked to two sergeants who had their teams down there and one told his guys the eyes of the whole world are on (the park)," said Sgt. John Pallohusky, president of the police sergeants union. It was the same message from the other sergeant. "He told his team, 'Do your part, show the world this is what we do,"' said Pallohusky.

Under the watchful eye of police, the scene at the park was peaceful. Department spokeswoman Monique Bond said that, despite the massive crowd, officers made fewer arrests than a typical Tuesday night. That wasn't lost on observers, especially those who know the same park 40 years ago the world watched billy club-swinging police wading into crowds of protesters at the 1968 Democratic National Convention.

"It was a commercial for the city," said A.D. Frazier, the chief operating officer of the Olympic Games in Atlanta. "The fact that it went off flawlessly will stand out as a plus in everyone's mind who votes for an Olympic city."

Even so, Smith said, that scene will be hard-pressed to compete with the surveillance video from the night Abbate allegedly beat the bartender in February 2007 after she refused to serve him more drinks. The footage of the 250-pound officer punching, kicking and throwing the 115-pound bartender aired repeatedly after it surfaced the next month.

"All we see is the Abbate tape rolling over in our heads and we forget the absolute (great) job they did out there," he said.

It remains to be seen whether the Abbate case generates as much angst for the department as that of Jon Burge, the former commander of a unit that allegedly tortured black suspects decades ago. Burge long has been a source of anger in Chicago, as politicians, community activists and others have complained that he remained free, living in retirement in Florida, while men they say were innocent and confessed only after being tortured remained in prison. It was not until this year that Burge was charged by federal authorities with lying under oath when he denied participating in torture.

"Burge has haunted them for years," said Wesley Skogan, a Northwestern University political scientist who has studied the department extensively. "The Abbate case is difficult (and) because we've all seen the tape 10 times, it will linger longer in the public imagination."

Skogan said that how long Abbate casts a shadow on the department may depend on what attorneys are doing behind the scenes, and whether Abbate walks into court and pleads guilty or goes ahead with a trial.

"If there is a plea settlement as time gets really close, that might take the wind out of the sails," he said. But, he added, even if that happens, "It could linger like O.J. (Simpson) or go away very quickly."

Bond, the police spokeswoman, would not specifically discuss the Abbate case. But Craig Futterman, a University of Chicago law professor who has studied the department, said it's clear why Weis publicly denounced Abbate and recommended firing him.

"By making an example of him they're saying this is a new day, we don't tolerate this stuff in Chicago," he said. But he wonders if the firing was little more than a public relations ploy. "My fear is that the underlying issues that allowed Abbate to do what he did ... haven't been addressed," he said. "As much as they want to say, 'this is a new day' ... is this really true?"
at Monday, December 08, 2008 No comments:

Be a friend: On the Job author on Facebook

On the Job author Daniel P. Smith has opened his Facebook page. Be a friend and drop him a line. He exists under his far less formal name, Danny Smith. (Forgive him if he takes a while to respond. He's still learning his way around the Facebook world.)
at Monday, December 08, 2008 No comments:

Order a Copy of On the Job 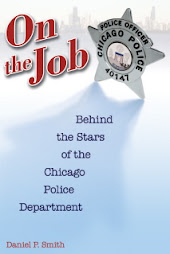 Click on the book cover to purchase a copy.

Daniel P. Smith
An award-winning, nationally published journalist, Daniel P. Smith left his second career as a high school English teacher behind in 2004 to pursue the writing life. Less than five months removed from the classroom and 23 years old, Smith teamed with Chicago-based Lake Claremont Press to write On the Job: Behind the Stars of the Chicago Police Department, his first book and one inspired by his roots in a Chicago Police family. A 2003 graduate of the University of Illinois at Chicago, where he was an accomplished track and field athlete, Smith lives in Chicago with his wife, Tina, and children, Fiona and Gavin.